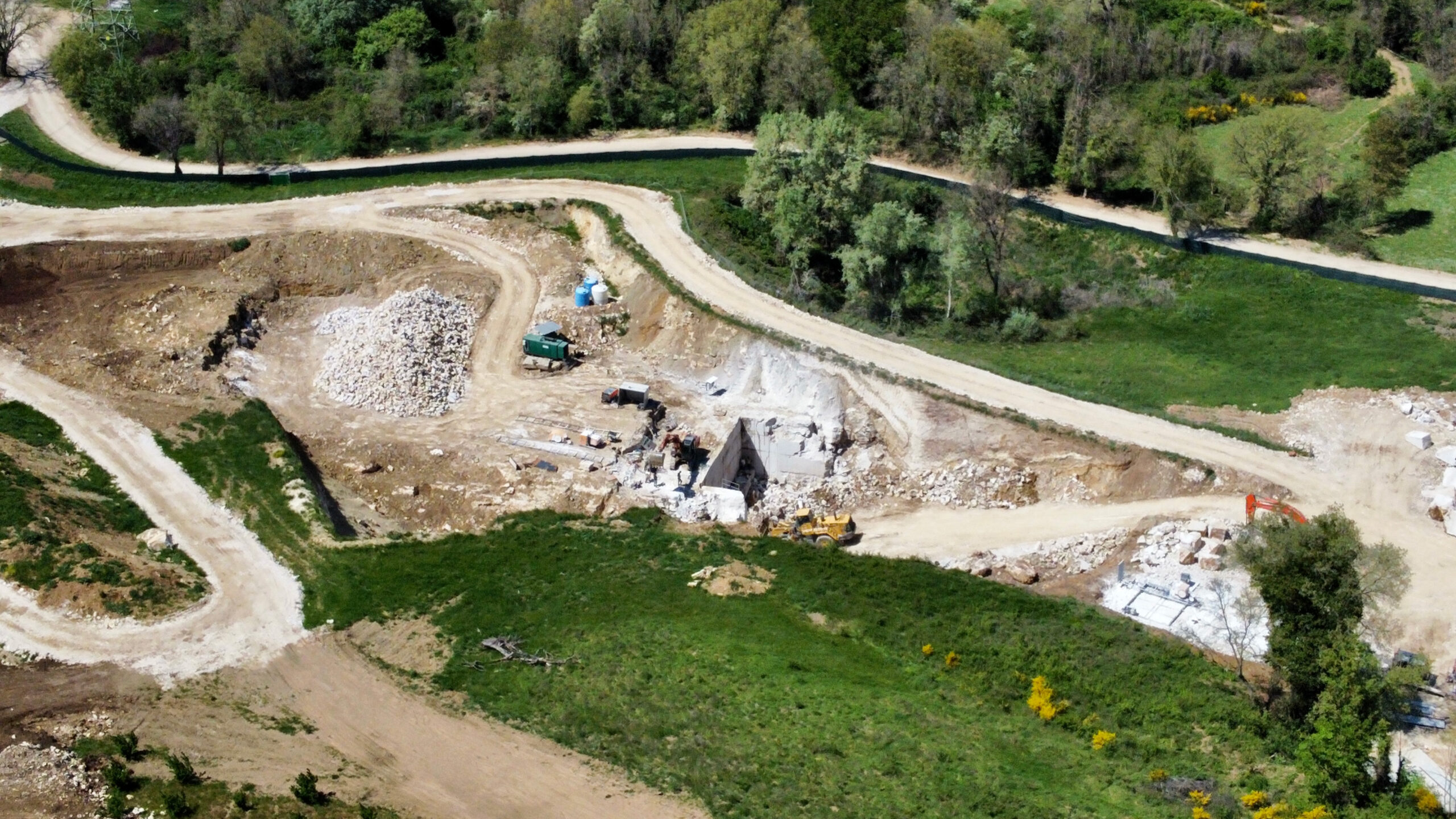 The quarry is located 20 km north of Rome, in the area between the Treja river and Mount Soratte. The morphology of the deposit is tabular, slightly wedge-shaped and remains interspersed with the pyroclastic formations that characterize the general geology of the outcrop area. Travertines from Lazio can mostly be defined as thermogenic. In fact, although they come from different areas and have variable thicknesses, they are closely connected to magmatic events that fit well into the genetic geological context of the formation of the Apennine chain, which caused a more or less active Cenozoic volcanic activity along the Tyrrhenian edge. 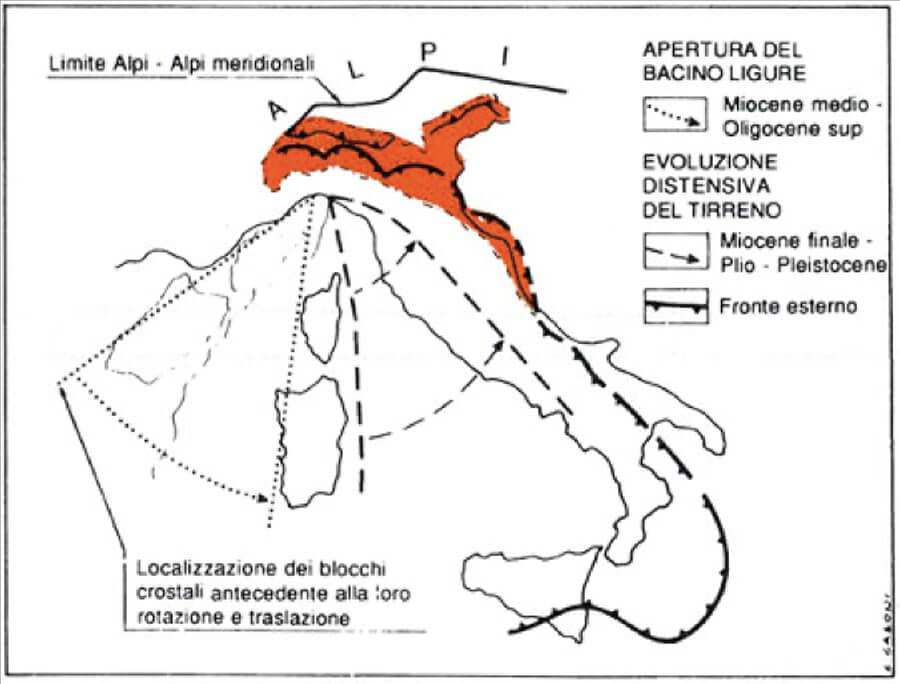 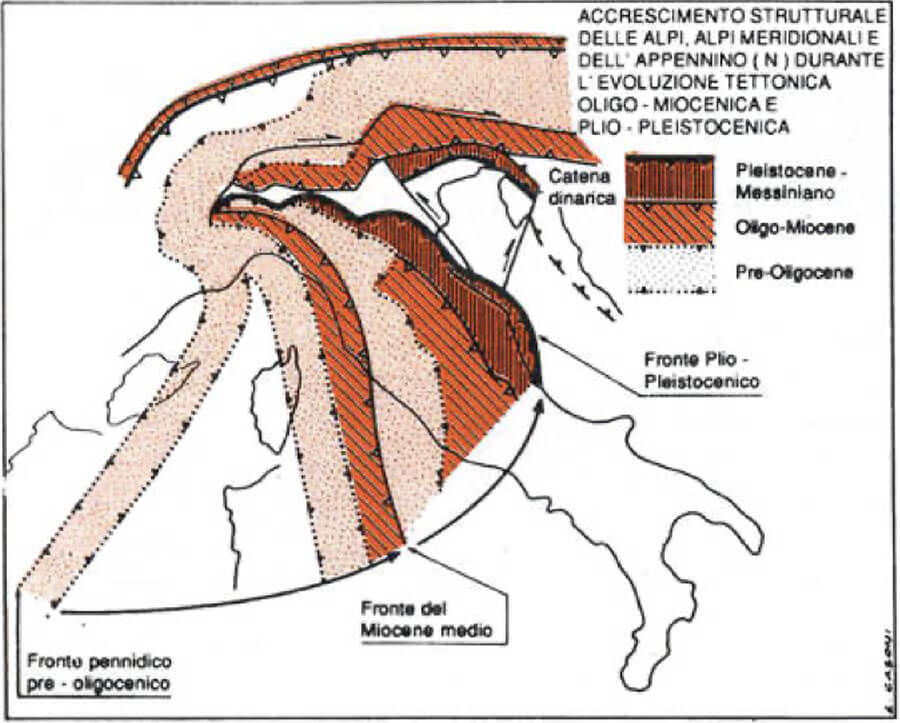 The Apennines is a structurally articulated orogenetic chain that begins to form in the upper Cretaceous, and whose genesis continues to this day. Its evolution can be divided into different phases that originate from the migration of the African plate against the European one, with a very complex initial situation also due to the presence of a series of tiny plates positioned between the two main ones.

Two of these microplates, Iberia and Adria, will be the ones that will affect the Apennine genesis in the most striking way. In the Middle Upper Jurassic, the opening of the central Atlantic causes a first phase of eastward drift of the African plate, deflected northward starting from the Upper Cretaceous when the North Atlantic also opens.

Between the two plates there was initially an ocean basin called the Ligurian-Piedmontese Ocean that separated Europe and Iberia, then in solidarity, from the Adriatic promontory of Africa. About ninety million years ago, a series of disjunctions and rotations separate the Iberia and Adria plates, causing the consumption of the Ligurian-Piedmontese Ocean while Africa converges directly against Europe.

In what will be the area occupied by the future Apennines begins the stacking of tectonic units that tend to rise more and more.

With the upper Eocene the oceanic convergence ends, accompanied by the suturing and closure of the Ligurian-Piedmontese Ocean, by the subduction of the Adria plate towards the west-southwest, below that of Iberia, and the setting of a series of processes east-north-east tectonics associated with orogeny. From the upper Eocene to the present, therefore, in what is defined the zone of ensialic convergence, with the evolution and setting of the typical features of the Apennine chain, the formation of the deformed chain-foredeep system and the facing undeformed foreland to today’s Adriatic Sea.

As for the current Tyrrhenian Sea, it is interpreted as a geologically defined back-arch basin in an extensive phase characterized in outcrop by weak raised and depressed side-by-side structures that recall, even if in a reduced condition, the style of Horst and Graben aligned in systems in the Apennine direction, interrupted by faults. It is along these structures that the most important volcanic systems of central Italy would later be established.

A study of the deep structure of the central Apennines confirms in these areas a reduced thickness of the earth’s crust, the presence of the Moho discontinuity at a depth of about twenty kilometers, and high values of the thermal flux that may involve locally, for example to the north east of Rome, anomalous temperatures that already at a depth of 3 kilometers are between 150 and 300 ° C, that is up to five times higher than in other regions. 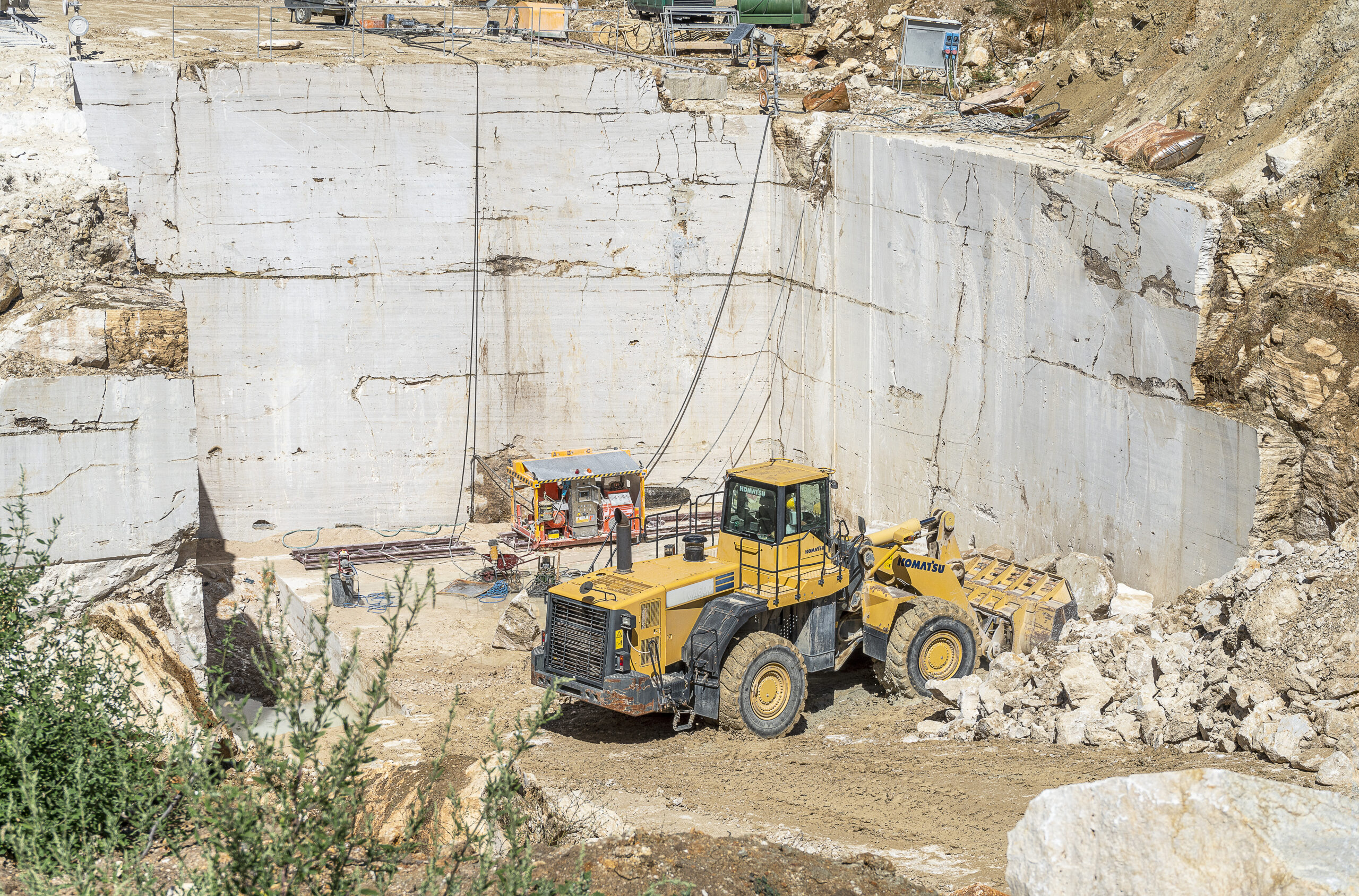 The cultivation of the field takes place according to three main phases:

The first phase consists in making the horizontal cut on the mountain. The protagonist of this process is the chain saw, an innovative machine on rails, similar to a large electric saw consisting of a blade of about 3.5 meters equipped with a chain with diamond or Widia teeth. The latter makes precise cuts in the rock penetrating like the blade of a knife.

The second phase consists in the vertical cut to the mountain and with which a portion of rock called ‘bank’ is separated from the marble mass by using the diamond wire machine. It consists of a carriage sliding on two tracks, an electric motor and a side pulley in which the diamond wire is positioned. The latter is made to slide into a hole, previously dug into the rock by a drill, and finally closed in a ring around the pulley. At this point the machine advancing on the tracks always keeps the wire under tension which, turning at high speed, abrades the rock and makes deep vertical cuts to the mountain. At the end of this second phase, the bank is completely detached and is therefore ready to be overturned in the quarry square with the aid of an excavator and water inflatable metal cushions that are inserted into the space created by the cut on the mountain. 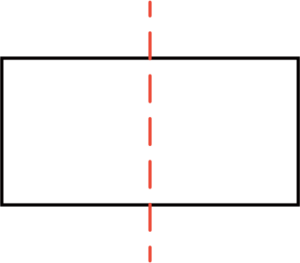 The third phase consists in squaring the blocks: the now overturned bank is divided into portions using the diamond loom machine. 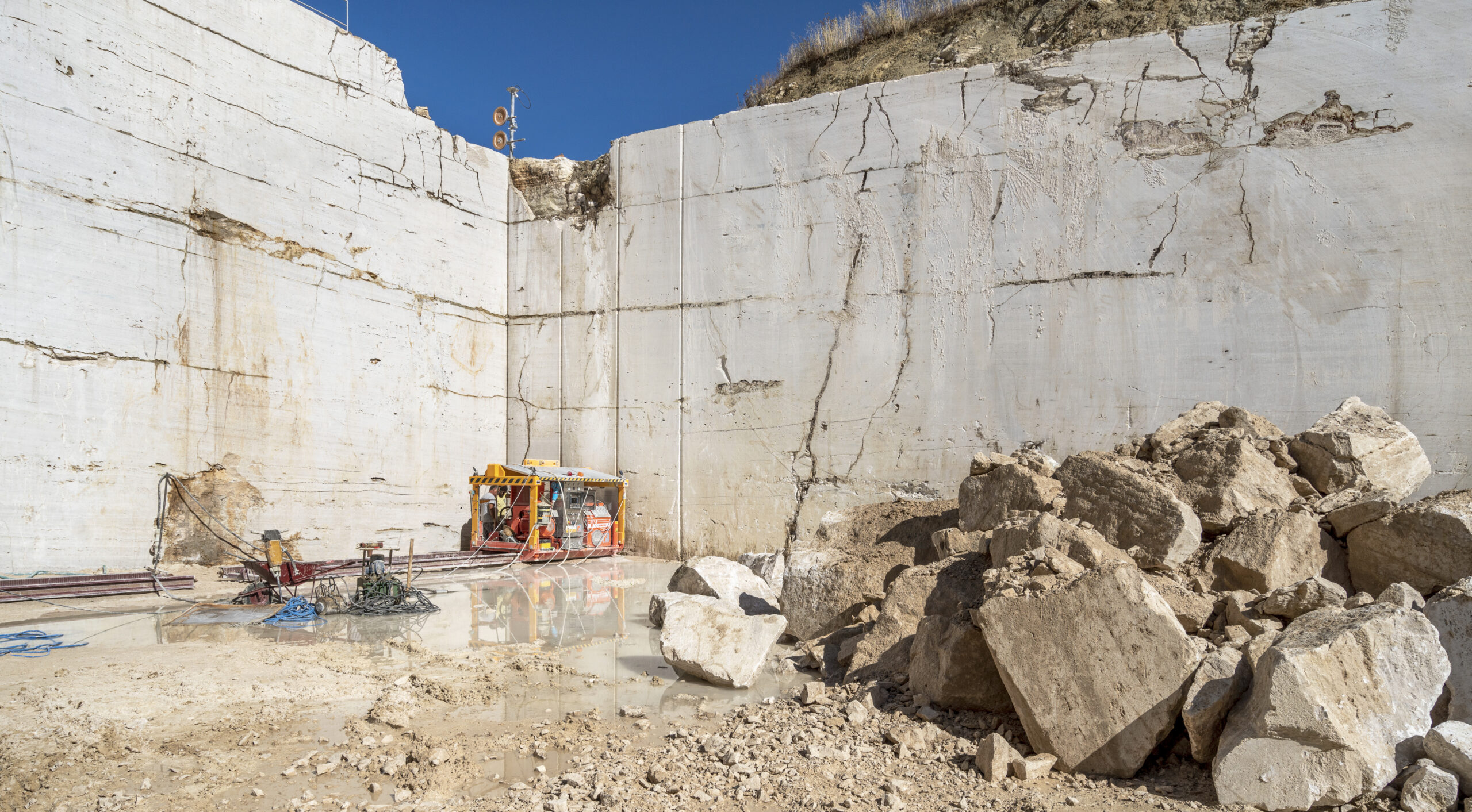 The company operates in compliance with all mandatory rules and good practice.

The degree of attention paid to the workers employed for whom objectives of maximum safety and comfort are pursued is significant. The company rigorously applies the provisions of Legislative Decree 624/96, of the Presidential Decree 128/59 and of the Legislative Decree. n. 81/2008.

Representative is compliance with BS OHSAS 18001: 1999, an international standard for the management of workers’ health and safety. 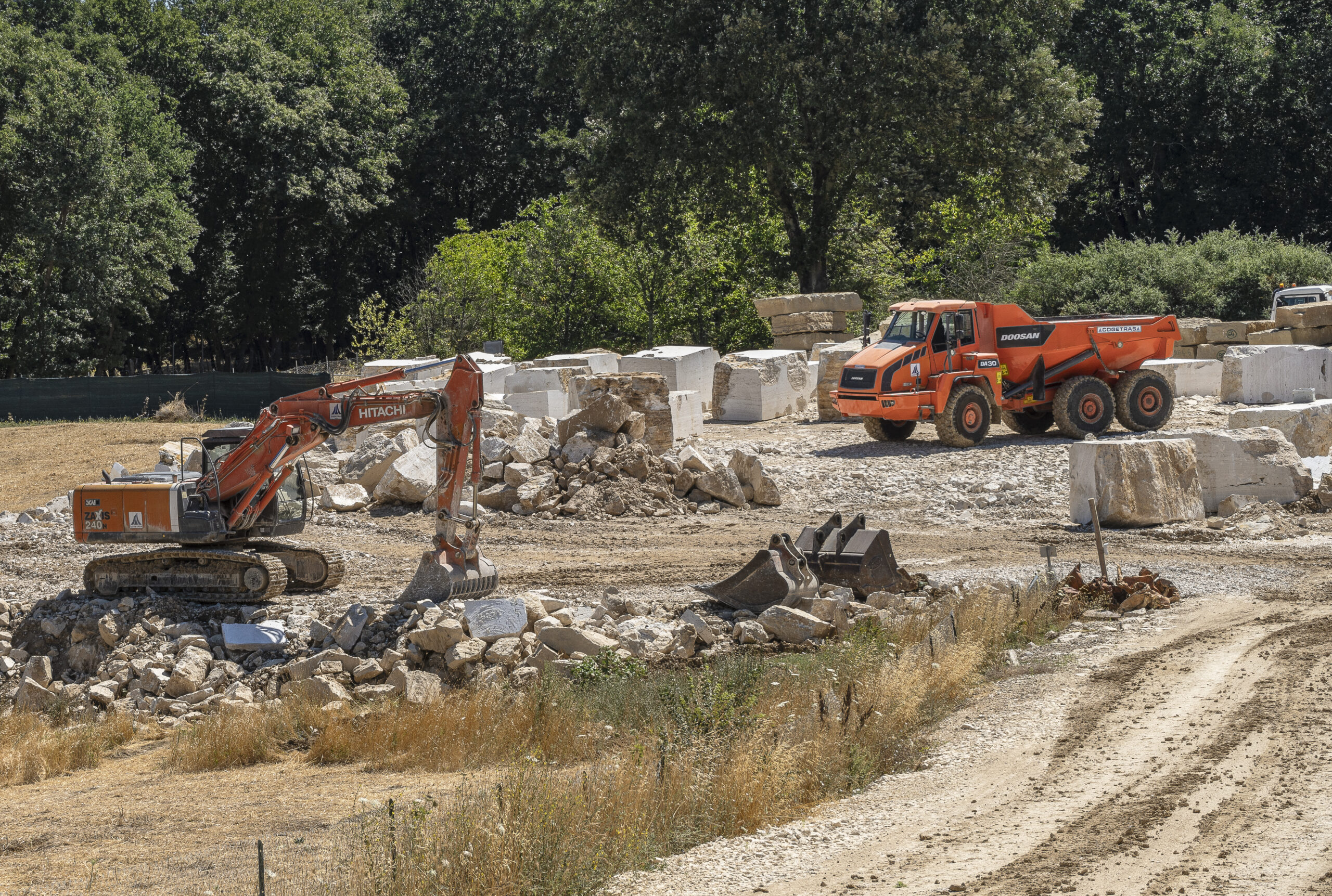 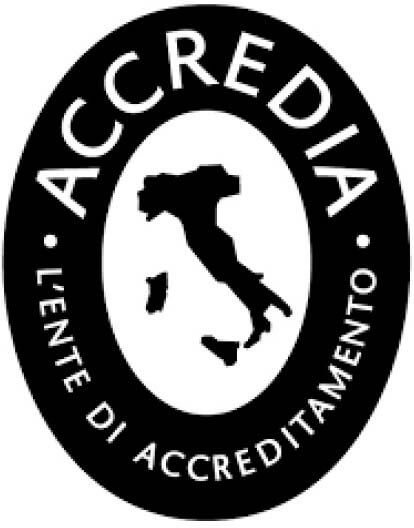 Kingtone has always considered fundamental, in carrying out its production and extraction activities, the needs of respect for the environment and in particular that of landscape protection aimed at restoring and preserving the quality of the territory.

The company adopts the innovative cultivation system “by sectors”, whereby the recovery of the area takes place at the same time as the extraction works. The quarry area of the cultivated sector is returned to its agricultural purpose already during the cultivation of the next sector.

Before the start of cultivation, the soils are subjected to geochemical analyzes in order to identify the “0” point not to be altered. Furthermore, in compliance with international environmental protection standards, all the guidelines of the UNI EN ISO 14001: 2015 standard are adopted.